Building End Straining Assemblies – Do it Once, Do it Right! 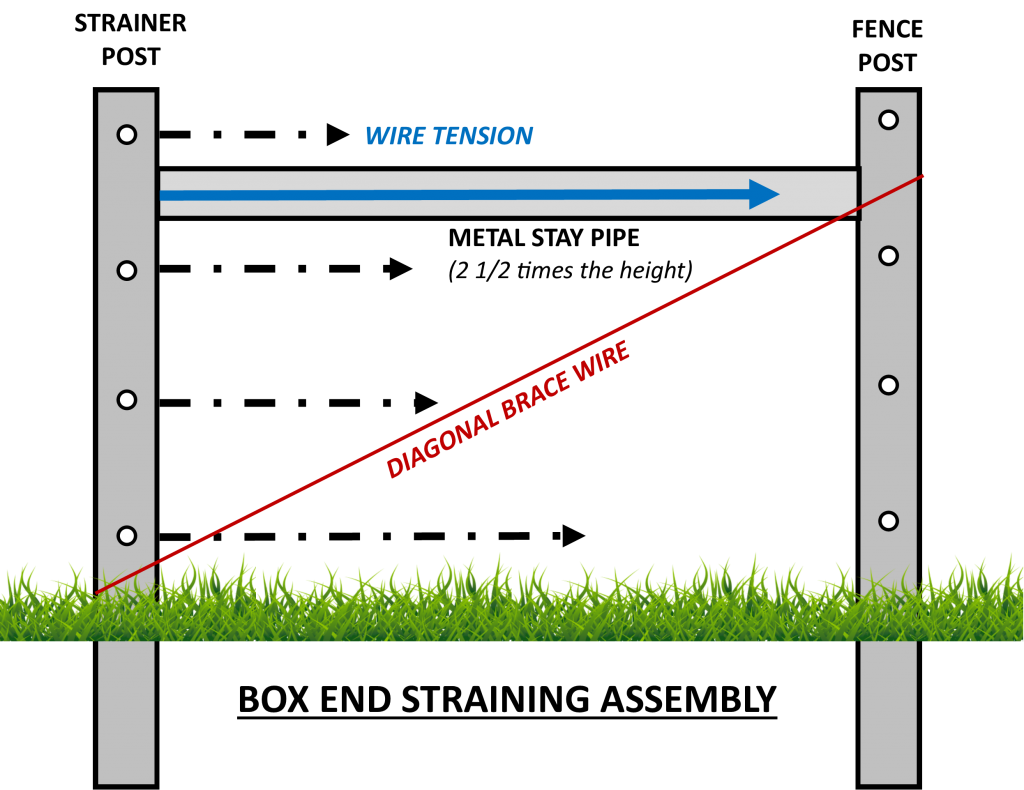 Building a fence can be hard physical work, but a lot of the sweat is wasted if the fence fails due to poor design and flawed construction technique.

Sound end-brace design is based mostly on common sense seasoned with a pinch of physics and a dash of trigonometry. It doesn’t take a rocket scientist to realize what’s happening when three, four or more strands of fence wire are stretched tightly between two end posts that might be located several hundred metres apart. The pull of the wires will cause the posts to lean toward one another, putting slack in the wires — unless the posts are braced against the pull.

Probably the most common bracing design is the H-Brace or “Box End Assembly”, which involves placing a horizontal cross-member between the end post and the next post in the fenceline. Looking at a diagram or an existing brace, it doesn’t seem too technical.

But if you drive the country roads and really observe, you’ll probably see very few Box End Straining Assemblies have been built in a way that optimizes their strength.

A Box End Assembly system is one and half times stronger than a diagonal bracing system that pushes against the ground.

The purpose of a Box End Assembly is to counteract the force of the fence wires pulling on the end post. It’s like you’re building something to push back against the force of the wire. The “Box” is formed by placing a cross-member or “Stay” between the end post and the second post, at a height approximating 3⁄4 of the upright post height. The Stay is then secured to the upright posts using brackets that are clamped on the concrete posts and pipe.

A key element to the Box Assembly is the diagonal brace wire fastened around the bottom of the end post and around the second post at the point where the Stay and second post meet. The diagonally placed loop of wire is then twisted tight with a twitch.

Put simply, the strength comes from creating a right triangle with the assembly components. The end post and the Stay make up two sides of the triangle and form its right angle. The diagonal brace wire forms the triangle’s opposite side. A physicist can give you the technical reasons why it works. Bottom line: It just works better for making an end post stand up straight.

Long-time fence builders can attest to the fact that Box Assemblies made with short Stays don’t seem to last very long.

According to a rule of thumb that many professionals follow, the length of the Stay should be at least 2 ½ times the height of the upright posts. So, if the end post and second post stand 1250mm tall, make the Stay of the Box Assembly at least 3150mm long.

Australian Concrete Posts’ fence system is specifically designed and manufactured to easily build strong and long-lasting Box End Straining Assemblies that meets all the good mathematics of a strong end brace system. ACP’s Stay pipe is easily secured with specially designed Galvanised Steel brackets to the upright posts at each end of the Box shape. The prestressed concrete strainer posts are built extra thick and long to be used as the end posts, and the second post in a Box end is simply your first intermediate concrete fence post.

A strong end brace and straining assembly system is not new, but by using the correct ratio’s, good quality and long-lasting components and fence posts, this tried and tested method will ensure your fence will last a lifetime, just like the concrete fence posts are designed to do.
For more information about the Australian Concrete Posts Box End Assembly and patented bracket fence system ask your local Rural Store  or visit our website www.ConcretePosts.com.au.